CONTEMPORARY MUSICAL RITUAL
Music, performed from the altar of the Sanatorium by musicians and following the codes of a possible rite, is here exalted as a means of transcending the functionality of the laptop that becomes instrument and medium of a personal and shared manifestation of the sacred. 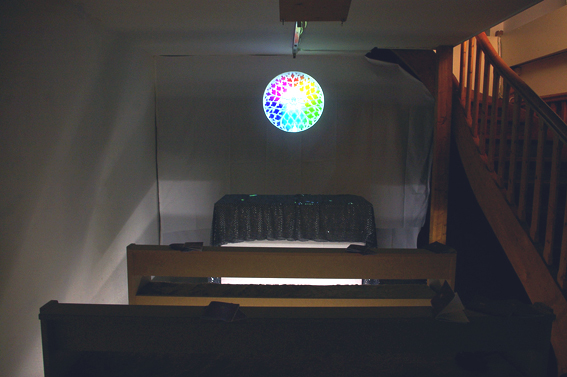 In the folklore of a period, the religion, mysticism, rites, and faiths, play a major role. In the past, places devoted to the sacred were temples, churches, crypts, or other places of worship; in our case the place devoted to faith and contemporary religion defined “Sanatorium” lies in the basement of a gallery to represent the contemporary sacredness related to the truth of emotion expressed through the medium of music.

The folkloric music, once played on homemade instruments, has always been a simple way to celebrate the sacred side of life. The “neo-folkloric” music proposed at the Sanatorium, as in the past, is also performed with the most simple instruments, except that here, guitars, lutes and bag pipes have given way to the most common and functional of present-day instruments: the laptop, the new popular instrument.

But there is humor also in the sacred. Thus, as in typical representations dedicated to this subject, here too there lacks no irony. As evidenced by the Mac standby-spiral projected above the altar, that, recovering the austere gothic motif of stained glass, represents ironically the main hope of the Sanatorium community. For, in the same way as the gothic rose window were observed by believers during mass, today, it is precisely when we expect a computer to start working again, that we give our hopes to faith more than to technology.