STREET MUSIC ONLINE ARCHIVE
Calle record is an online archive project that intends to develop, through a multimedia platform, the recording, documentation and accessibility of music played in public spaces.

The Calle Record project developed out of its creators’ interest in music and its diffusion in public spaces. Musical performances on the street combine different factors such as: the absence of a stage and consequent reduction in the distance between the music and the audience, the active role of the latter and their possible intervention and, last but not least, the influence of the surrounding soundscape.
These factors in addition to the typical random nature of the event make street music unique in its genre.

The research, cataloguing and distribution of street music are one of the main points of interest for Calle Record. The opportunity to trace a certain song or piece of music to a precise time and location remains something the project is predisposed to. Beyond musical archiving and the usages that derive from this (analyses, research, entertainment, etc.), Calle Record is also interested in the contexts where these performances take place. The recording location, resonance and contamination with the sound of daily life (people, animals and mechanical, industrial and natural sounds) all have a fundamental value in that they often lead to new, sometimes accidental, surprising and innovative compositions, but above all, they contextualise the music in a current situation (be it social, political or historical). 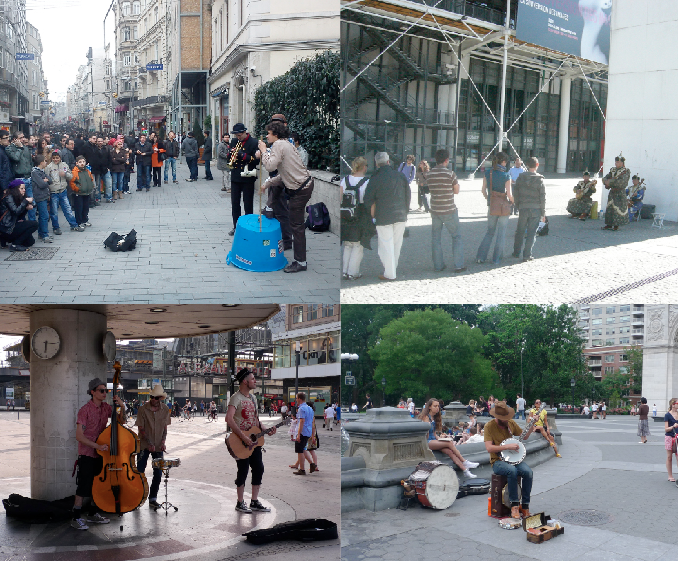 One of the aims of the Calle Record project is to create an archive of the sound and musical heritage of a given region, which can also be used to analyse cultural and political influences (migratory flows, communities, etc.) as well as the age-old traditions at the roots of street music. Music is a document that can evoke the sounds of the past; it is a useful guide in the study of auditory habits and perception. This remains an unexplored area as historians and critics are fundamentally concerned with presenting the creation as fruit of the artist’s imagination or other musical forms. However, even composers live in the real world and are aware of the conscious or unconscious influence of the sounds and rhythms of their age and culture in their work.